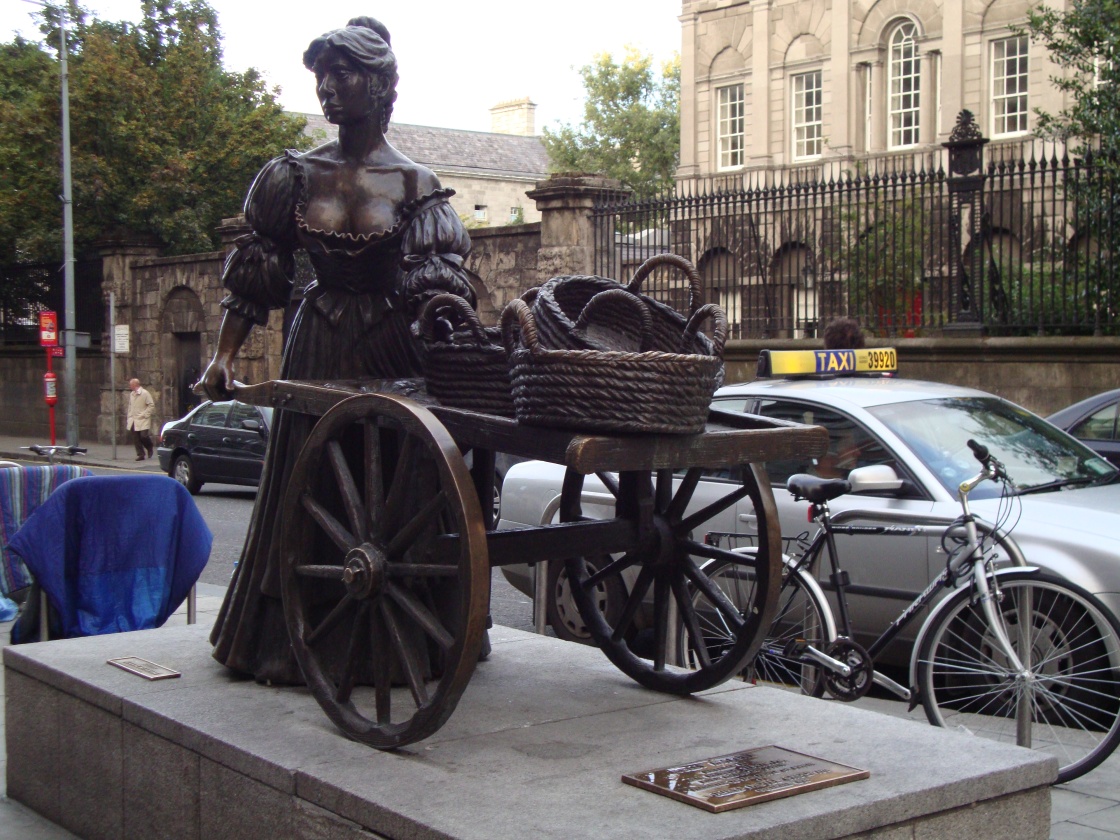 In Dublin’s fair city, where the girls are so pretty, I first set my eyes on sweet Molly Malone…most people are familiar with this ballad of Dublin about the fictional sweet fishmonger’s daughter in the 17th century who sold her cockles and mussels through the streets of the city. While there is actually no evidence that this song was written about a specific person, many people have searched through historical records and gravestones trying to find the Molly Malone that could be the muse of this song. In fact, so many people were claiming the song was about a real woman that finally in 1988 the Dublin Millennium Commission endorsed that there was a Molly Malone that could have been the one- she had died on June 13, 1699 to the same fever that the song tells of the end of Molly. They then deemed that June 13 be forever remembered as ‘Molly Malone Day’. This song has turned into the unofficial anthem of Ireland. This statue was originally set along Grafton Street in Dublin but has since been relocated to Suffolk Street just outside the tourism office. There have been many versions of this song through the ages, each one beautifully sad and poetic, that is no wonder it has become such an anthem of Dublin and to Ireland. So when next in Dublin, be sure to stop by and say hello to sweet Molly Malone while you make you way through streets broad and narrow singing of cockles and mussels, alive, alive, oh.

The view from the Mount of Olives 🇮🇱
Visiting Temple Mount and learning the history of such an incredible place 🇮🇱
A fortress in the caves of.the steep cliffs where zealots would live 🇮🇱
Exploring a Crusader castle at Nimrod Fortress Nature Preserve 🇮🇱
Exploring a Roman city in Israel at Caesarea National Park
Hello Israel! Im ready for you!
Hiked to the bottom of the falls at Fall Creek Falls Sfate park and it was incredible. We cant get enough of these beautiful rocky trails and stunning waterfalls
No better place to be on a holiday weekend than in the small southern town of Smithville where we enjoyed the Fiddlers Jamboree. Fiddle music, folk dancing competition, and great food. 🇺🇲
Jack Daniels Distillery tour for the win today! Learning all about the history and process of Tennesse's favorite whiskey
A day exploring the incredible Tennessee Aquarium with two buildings dedicated to the river and ocean animals. 🦈